Norton attacks LeDoux in a corner 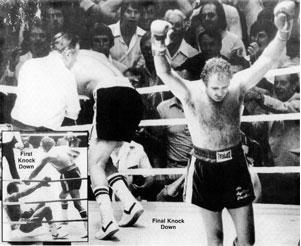 LeDoux dropped Norton in the final round

Norton, LeDoux battle to a draw

BLOOMINGTON, Minn. (AP) — Ken Norton’s boxing career appeared at an end when Scott LeDoux rocked him twice in the final three rounds of a 10-round bout at the Met Sports Center Sunday.

But Norton, who is trying to reclaim his national ranking as a boxer, escaped with a controversial split decision draw in the nationally televised fight. LeDoux, fighting in his home state, felt he had a knockout.

"I thought he was done," said LeDoux, who floored Norton in both the ninth and 10th rounds. "Even if it wasn’t over, he was done. I think we just retired him.”

Norton disagreed, however, saying he was looking forward to a return fight.

"I think a rematch would be advantageous to both of us," said the boxer-actor. "To a certain extent, the draw hurts, but it also is fuel for a rematch.

"I felt I won every round up until the eighth round. But yes, I think it was very obvious that in the last round I was in a little trouble."

LeDoux took left jabs from Norton consistently for seven rounds, but said he was never hurt.

"If their guy could punch, I would have been out of there because I took a couple of clean punches. But I didn’t take any bombs. I was never in trouble." LeDoux also said that part of his fight plan was to let Norton wear himself down in the early rounds and then strike back.

"For the first seven rounds, we thought it over and said, ‘Let’s just keep it close. If he gets in trouble, try and take him out. If not, box with him.' Then in the eighth and ninth, I tried to undress him, set him up for the bomb,” explained LeDoux.

LeDoux, 25-7-4, scored with a solid right in the ninth, sending Norton reeling against the ropes, and landed another right at the bell.

LeDoux knocked Norton down early in the 10th, and left-right combinations staggered the former World Boxing Council champion, 41-6-1, with less than 30 seconds left in the fight.

Referee Wally Holm scored the fight 95-94 in favor of LeDoux, with judge Denny Nelson giving Norton the edge 96-94. Judge Leroy Benson called it even at 95-95. The Associated Press gave five rounds to Norton and three to LeDoux, with two even.

Norton, whose boxing career probably would have ended with a loss to the lesser-known LeDoux, pinned the Crosby, Minn., native against the ropes for much of the first seven rounds.

A solid left near the end of the third round hurt LeDoux, and Norton also had his opponent in trouble at the end of the fifth when he connected with a left-right combination.

Norton, who collected $250,000 to LeDoux s $50,000 for the fight, also carried the seventh round quite easily, but LeDoux thrilled the home-state crowd with his comeback in the final rounds.

A brief flurry by LeDoux at the start of the eighth brought the partisan crowd to its feet. Norton, who had lost his last two fights, took a thumb in his left eye and had trouble seeing for the rest of the fight.