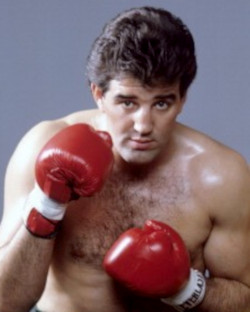 Gerry Cooney is best remembered for his classic 1982 fight with Larry Holmes for the World Heavyweight Championship. Cooney was considered to be a White Hope by many critics during his career, but he also acquired a reputation as a knockout artist.

Cooney grew up on Long Island. His father, an abusive alcoholic, pushed him into boxing in his teens. "I had to be in bed early, up early, and run, run, run," Cooney said. Though Cooney bridled at the discipline, he went along. "I lived in fear," Cooney said. His father died of cancer in 1976.

In 1973, Cooney stopped Larry Derrick in three rounds to win the New York Golden Gloves Sub-Novice Middleweight Championship. That same year, Cooney's brother, Tom Cooney, reached the finals in the Sub-Novice Heavyweight Division, where he was defeated by Eric George.

Cooney reached the finals of the Light Heavyweight Open Division in 1975, but he was defeated by Johnny Davis. The following year, he outpointed Earlous Tripp to win the Heavyweight Open Championship. Cooney turned professional in 1977 after compiling an amateur record of 55-3.

In May 1980, Cooney stopped Jimmy Young after four rounds. He battered Young to the body and opened a bad cut over his right eye, which led to the stoppage. Five months later, Cooney knocked out Ron Lyle in the first round. After the fight, while he was in his dressing room getting his damaged ribs taped, Lyle said that Cooney was the hardest hitter he had ever faced. In 1981, Cooney brutally stopped Ken Norton in fifty-four seconds.

Cooney had a tentative agreement to meet World Boxing Association Heavyweight Champion Mike Weaver on October 22, 1981, but the WBA said Weaver had to fight James "Quick" Tillis next or be stripped of the title. Cooney was ranked #1 by the WBA and Tillis was ranked #3, but the organization said that Tillis was the highest ranked available contender when Weaver was due for a mandatory defense in March 1981. At that time, Cooney and #2 ranked Leon Spinks had other fights scheduled.

After the Weaver fight fell through, Cooney signed to fight World Boxing Council Heavyweight Champion Larry Holmes. Each fighter was guaranteed $10 million dollars. The fight would take place at Caesars Palace in Las Vegas, Nevada, and be televised live on closed-circuit and pay-per-view television all over the world. A week after the bout, it would be re-broadcast on HBO, and later still, on ABC-TV. The fight was originally scheduled for March 15, 1982, but the bout was postponed after Cooney tore muscle fibers in his left shoulder. It was rescheduled for June 11.

Since there had not been a white heavyweight champion in twenty-two years, the Holmes-Cooney fight had very important racial implications and was promoted to that effect by promoter Don King. The bout was one of the most racially toned events in boxing since Jack Johnson fought James J. Jeffries in 1910. “This is a white and black fight,” King said. “Anyway you look at it, you cannot change that. Gerry Cooney: Irish, white, Catholic.” Cooney’s managers, Mike Jones and Dennis Rappaport (known in the media as the Whacko Twins) fanned the flames, too. “I do not respect Larry Holmes as a human being,” Rappaport said. “I don’t think he’s carried the championship with dignity.” They pushed Cooney, with little subtlety, as white America’s champion. “He’s not the white man, he’s the right man,” Rappaport liked to say.

A record Las Vegas crowd of 29,284 created a record live gate of $7,293,600. There were many celebrities in attendance, including Joe DiMaggio, Farrah Fawcett, Ryan O'Neal, Wayne Gretzky, and Jack Nicholson. Also, in anticipation of victory, a special hot-line was installed in Cooney's dressing room so he could receive a congratulatory phone call from President Ronald Reagan. No such hot-line was installed in Holmes' dressing room.

The bout turned out to be a classic war, and Cooney showed his bravery and toughness. He was knocked down in the second round but came back strong, hurting Holmes with a left to the body at the end of the fourth round. The fight was stopped in the thirteenth round when Cooney's trainer, Victor Valle, entered the ring to prevent Cooney from taking any further punishment. Holmes always maintained that this was one of the toughest bouts of his career.

After the fight, Cooney repeatedly apologized to his supporters. "I'm sorry, I'm sorry," he said. "I tried with all my heart." He felt that he let down a lot of people.

Hindered with injuries and substance abuse problems, Cooney didn't fight again for two years. After two knockout wins in 1984, he retired. Cooney returned to the ring in 1986 and knocked out WBA #3* ranked contender Eddie Gregg in one round. *fact? Very questionable statement.

Cooney fought Michael Spinks in 1987. Prior to the fight, Spinks was stripped of the IBF title because he chose to fight Cooney instead of Tony Tucker, the #1 IBF contender. However, the fight was recognized as being for the World Heavyweight Championship by 18 states and The Ring Magazine. Spinks, an 8 to 5 underdog, dropped Cooney twice and won by a fifth-round TKO.

In 1990, Cooney returned to the ring one more time and fought George Foreman. Cooney had a good first round, rocking Foreman with a left hook. After the fight, Foreman said Cooney "hit me harder than anyone I've ever been in the ring with." However, in the second round, Foreman floored Cooney twice and won by a knockout.

In retirement, Cooney has worked with at-risk youth and founded F.I.S.T. (Fighters’ Initiative for Support and Training), an organization to help retired boxers.

Boxing historian Herbert Goldman ranked Cooney as the 20th greatest heavyweight of all-time in 1987, and The Ring Magazine ranked him as the 53rd greatest puncher of all-time in 2003.