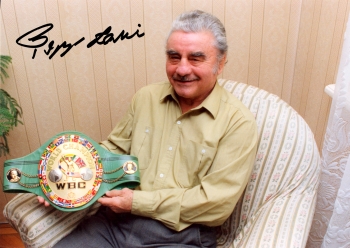 He set up camp in Vienna, Austria, although he occasionally had to go to Paris to find sparring partners.

Papp was a skilful southpaw and a hard puncher, but he was dogged by brittle bones and hand injuries, which periodically kept him out of the ring.

He won the European Middleweight Championship in 1962 and made six successful title defenses.

Papp was on the verge of a title shot against World Middleweight Champion Joey Giardello when the Hungarian government revoked his permit to travel abroad in 1965, thus ending his pro career. He had a professional record of 27-0-2 with 15 knockouts.

"I was one step away from a world title shot but it would have meant going to America and my government didn't approve," Papp said in an interview after the fall of communism in Hungary in 1989. "I think it was just jealousy. I was earning more money than most of them. There was a lot of antagonism."