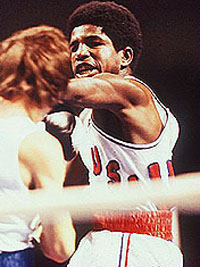 Randolph competing in the Olympics

Leo Randolph was a product of the Tacoma Boys Club amateur program, along with fellow Olympic Gold Medalist Sugar Ray Seales, and future world champions Rocky Lockridge and Johnny Bumphus. He was trained as an amateur and professional by Joe Clough, the head trainer at the Tacoma Boys Club.

Randolph won the WBA Super Bantamweight Championship by stopping Ricardo Cardona in the 15th round. He retired after losing the title in his first defense to Sergio Victor Palma by a 5th round TKO.

He was inducted into the Tacoma-Pierce County Sports Hall of Fame in 2005.

As of March 2007, Randolph was working as a bus driver in Tacoma.