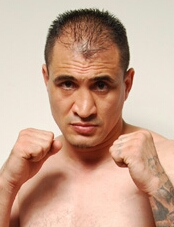 He performed in 1987 at age 12. A friend took him to boxing because he discovered his smart and aggressive side to see their behavior on the street.

Selection remained in until 1998, winning the most championships in and out of Jordan.

Come to Brazil with 118 and has two more fights in Brazil, completing 128 amateur fights.

And still my dream to fight for the championship. My preference would be one of those entities:. IBF / WBA / WBC / WBO / IBO.

But I'm looking for a world title of any other entity.