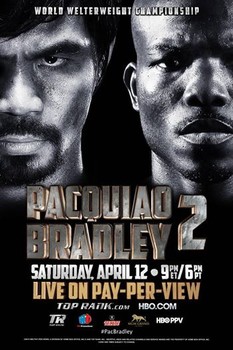 Bradley had promised to go for a knockout and he did just that, wading into battle even though he is not known for having much power. He has only one knockout since 2007, against a long-faded former lightweight champion Joel Casamayor, but it did not deter him.

Still, that strategy played into Pacquiao's hands because he was so aggressive, bordering on being reckless. Pacquiao let his hands fly throughout the fight and although he couldn't knock Bradley down, he landed dozens of powerful punches and left no doubt that he deserved the victory to reverse the split decision loss he suffered on June 9, 2012.

"He gave me a good fight. He's not that easy," Pacquiao said. "I listened to my corner about keeping my hands up and timing. He threw a lot of punches. He threw wide, wide, wide hooks. I got hit one time and said it's not good to be careless."

Said Freddie Roach, Pacquiao's Hall of Fame trainer: "Manny was a little sloppy tonight but I was happy with his performance. It looked like Bradley was going for a one-punch home run."

Bradley said he was hampered by a right calf injury in the first round, but he did not make excuses. He was a sportsman and gave Pacquiao credit for the victory.

"I have no excuses," Bradley said. "Stuff happens. I got nothing to say about it. ‎You can't say nothing against Manny. I lost to one of the best fighters in the world. Manny fought his heart out. I tip my hat to his whole corner, Freddie Roach and his whole team."

Said Joel Diaz, Bradley's trainer: "After the first round Tim came back to the corner and said, 'I think I tore my right calf.' I began to massage it. He was in a lot of pain from that point on and I didn't have much to work with."

As soon as the fight started, Pacquiao turned on his aggressive jets and the pro-Pacquiao crowd began chanting "Manny! Manny! Manny!"

Pacquiao, a southpaw, had great success with his straight left hand. As early as the second round, he used a straight left to knock Bradley off-balance and into the ropes, and then moments later stood him straight up with another excellent left hand. But Bradley, who earned $6 million plus a share of the pay-per-view profits, responded in an action-packed round, slinging overhand rights.

"I tried, I really tried," Bradley said. "I wanted that knockout. Manny is a great fighter, one of the best in the world. I lost to one of the greatest fighters in boxing. I kept trying to throw something over the top, that was the plan. I knew I had to do more in this fight than in the last fight."

"Bradley was wild on the outside so I went to the inside," Pacquiao said.

They continued to let their hands fly in the third round. Pacquiao landed repeatedly with his straight left hand and Bradley landed hard body shots. They spent most of the wild round going for the knockout.

Pacquiao (56-5-2, 38 KOs), who was guaranteed $20 million plus upside on the pay-per-view profits, appeared to hurt Bradley (31-1, 12 KOs) late in the sixth round when he closed the round unloading a sustained flurry with Bradley backed into the ropes. Then he had a huge seventh round. He hurt Bradley and had him hanging on after firing about a dozen unanswered punches with Bradley in a corner. Moments later, he let another flurry fly, although Bradley motioned for him to come to him. Pacquiao obliged and the round ended.

The Filipino icon, still with tremendous speed at age 35, looked more like the younger version of himself, the one who attacked opponents relentlessly. Bradley, 30, of Palm Springs, Calif., was happy to go along and it made for an exciting fight, such as in the ninth round when there were many fierce exchanges, even though Pacquiao got the better of them.

Even though Pacquiao did not get the knockout he said he wanted to get, he still did something nobody else has done -- hang an official loss on Bradley.

"He's fighting Tim Bradley, who nobody has knocked out or beaten," Top Rank promoter Bob Arum said. "He was fighting one of the great welterweights in the world. He's not fighting a guy who has cement in his shoes and can't move and is a 15-to-1 to shot, charitably."

That last remark was Arum making reference to pound-for-pound king Floyd Mayweather Jr.'s May 3 welterweight title unification fight against heavy underdog Marcos Maidana in a fight Arum spent as much time during fight week criticizing as he did pumping up his own fight.

By the 10th round, the right side of Bradley's face was red and swollen from eating so many left hands.

"I picked up more steam in the second half when I made adjustments," Pacquiao said. "Bradley is much better than in the first fight we had. He hurt me on the chin."

Bradley must have known he needed a knockout in the final round, but was unable to land much of anything, except for an accidental head butt in the final seconds that opened a cut over Pacquiao's left eye.

"That was a helluva performance from two terrific athletes and two great sportsmen," Arum said. "The crowd was entertained and it was a competitive match. Manny's performance was absolutely great. I was very pleased. I thought Tim looked to surprise him with a game plan where he became the aggressor and Manny was able to turn that around. I'm really proud of them."

Bradley figures to return in another major fight regardless of the loss. He remains one of the best in the world.