David Haye fell short in his attempt to unify the heavyweight division as he was beaten on points by Wladimir Klitschko in Hamburg.

In front of 45,000 fans, including an estimated 10,000 fellow Brits, Haye was outboxed and outmuscled by his rival for 12 rounds.

Haye had promised a new game-plan for the fight but was unable to bypass his Ukrainian rival's ramrod jab to get off shots of his own.

The nature of the fight and the outcome was particularly disappointing given Haye's confident demeanour and various pronouncements beforehand, although he claimed afterwards he had broken a toe in his right foot.

Haye had labelled Klitschko a fraud and promised to inject new life into the heavyweight division but he was given a boxing lesson by Klitschko, who added Haye's WBA belt to the IBF and WBO straps he already held.

In monsoon conditions, many of the most expensive seats were vacant until minutes before the opening bell, open as they were to the elements at the Imtech Arena.

The 30-year-old Haye did not enter the football stadium on cue, presumably because he did not want to be left waiting in a chilly ring, meaning the fight started 25 minutes later than planned.

While many thought Haye's best chance of victory was to come out and take risks, the opening rounds were cagey affairs, with Haye standing off and looking for an opening and the Ukrainian trying to pin him down with his jab, his signature shot.

When Haye did come forward he was falling short, while Klitschko, 35, finally unsheathed his right midway through round two, which Haye stood up to well.

In round three there was already the feeling the fight had slipped into a groove, with Klitschko unleashing sharp left-right combinations and leaning all over Haye when the Londoner tried to slip the jab and get close.

And if the British fans expected their man to up his work rate and start taking more risks in the middle rounds, they were to be sorely disappointed, with Haye discovering what many Klitschko opponents already knew - that getting inside Klitschko's jab is almost impossible to do.

If anything, it was Klitschko who upped his game, peppering Haye with jabs and nailing him with a crunching right hand in round five.

Klitschko was docked a point for leaning in round seven, although Haye, who was giving away more than two stone in weight, seemed to be going to ground a little too easily.

In round nine, Klitschko started throwing right-hand leads, proof of his growing confidence and belief his opponent did not have anything in his armoury to hurt him.

And down the stretch, Haye, who was given a count in the 11th, although it appeared he had slipped, was limited to desperate, swinging rights, which Klitschko had little trouble in dealing with.

While Haye raised his arms on the sound of the final bell, the announcement of the scorecards only confirmed what most people already knew - that Klitschko had won by a procession.

It was a huge letdown for Haye's army of fans and their mood would not have been improved as they made their way back to central Hamburg through sheeting rain.

Haye, who at least had the good grace to shake Klitschko's hand after the fight, said he would now take a break and consider his options, although he had previously vowed to retire before his 31st birthday on 13 October.

It was Haye's first defeat since Carl Thompson stopped him in a cruiserweight contest in 2004 and his first as a heavyweight.

Haye, a former undisputed cruiserweight champion, falls to 25 wins and two defeats, while Klitschko, who has not lost since 2004, improves to 56 wins and three defeats.[15] 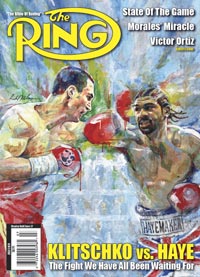 July 2011 cover of The Ring Magazine
Retrieved from "https://boxrec.com/wiki/index.php?title=Wladimir_Klitschko_vs._David_Haye&oldid=994585"