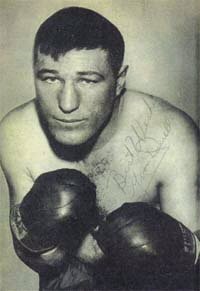 From a family of fourteen children, Yvon Durelle grew up in a small Acadian fishing village on the Atlantic coast. Like many others of his generation, he left school at an early age to work on a fishing boat. In his spare time, Durelle liked to box and while still working in the fishery, he began prize fighting on weekends. His brother Ernie Durelle also boxed professionally. Dubbed as the Fighting Fisherman, he began his professional career in 1947, boxing at various venues around the province of New Brunswick. Over time he gained a reputation as a tough opponent with a hard punch and his victories eventually made him one of the top ranked middleweight fighters in Canada.

In May of 1953, Durelle won the Canadian middleweight championship then, after defending his title and winning eight straight bouts, he moved up in weight class to fight in the light-heavyweight division where in his first fight against a heavier and stronger opponent, he defeated the Canadian champion to take the light-heavyweight title. The following year, he fought outside his native Canada for the first time, going to Brooklyn, New York to fight Floyd Patterson, an up-and-coming American Golden Gloves champion. Outpointed in eight rounds by the man who would soon become the heavyweight champion of the world, Durelle's strong performance in a losing cause against Patterson gained him wide respect in the international boxing world.

In New York City, in March of 1957, Durelle broke into the top ten world rankings with a 10 round decision over Angelo DeFendis. In May he won the British Empire light-heavyweight championship and the following month fought the top-ranked contender in the world, Tony Anthony. In a fight most experts say he won handily, Durelle was given only a draw against the heavily favored Anthony but it elevated him to the number 3 ranking in the world. He became a much talked about sports personality in his native country after he beat the German champion, Willi Besmanoff. In 1958, he defeated Clarence Hinnant, regarded by many as one of the best all around boxers of the time. The victory provided Durelle with the opportunity for his first chance to fight for a world title.

Yvonne Durelle's light-heavyweight championship fight against the great Archie Moore on December 10, 1958 at the Forum in Montreal, Quebec, is one of the most memorable fights in boxing history. Listed as a 4-to-1 underdog, the bout made Yvon Durelle a legend in Canada, gaining him near cult status for his performance. In one of the first fights broadcast coast-to-coast on American television, Durelle stunned boxing patrons by knocking the champion down three times in the first round. Under boxing rules today (except those of the World Boxing Council), the fight would have been stopped after three knockdowns in one round and Yvon Durelle would have been world champion. Also, he missed an opportunity when, after the first knockdown, he stood over Moore watching for several seconds before returning to his corner. As a result of his delay, the referee had to wait to begin the count, and Moore made it to his feet at the count of nine. Durelle swarmed all over the champion for four more rounds and knocked him to the canvas again in round five but Moore held on and eventually wore Durelle down to retain his world championship with an eleventh round knockout. The fight was the talk of the boxing world and members of the Canadian Press voted it the sporting event of the year.

Six months later, in June of 1959, at Durelle's home village of Baie-Ste-Anne, thirty-five fishermen died when they were swept out to sea by 40 foot tidal waves that pounded the wharf. Distraught at the loss of friends and relatives, in August he lost in a world title fight rematch with Archie Moore by a third round knockout. In November of that year he lost in 12 rounds to the Canadian heavyweight champion, George Chuvalo. Durelle fought only a few more times, before taking up professional wrestling in 1961. He returned to boxing in 1963 winning twice more before retiring permanently. He continued to earn a living at wrestling, primarily in eastern Canada but on occasion with Stu Hart's Stampede Wrestling, in Calgary, Alberta.

Despite his size and brutal profession, Durelle is often referred to as a modest and gentle man. However, in the 1970s an event would profoundly impact him and his family when, in a bar that he owned and operated, he shot and killed a man who had attacked him. Charged with murder, he was defended by a young lawyer by the name of Frank McKenna and was acquitted on the grounds of self defense. The trial received massive and sustained publicity and McKenna would eventually go into politics and be elected Premier of the province of New Brunswick.

Retired in his native village, a small museum with souvenirs of his twenty-year boxing career was built attached to his home where he and his wife of more than fifty years greet fans who still show up to see the New Brunswick boxer. In an article for ESPN.Com about the most memorable matches in boxing history, current-day referee Mills Lane said: "I don't think you'll ever see a fight like Durelle-Moore again...That fight transcended what great fights are."

Yvon Durelle's biography, "The Fighting Fisherman: The Life of Yvon Durelle" by author Raymond Fraser, was published in 1981. In 2003, Ginette Pellerin of the National Film Board of Canada made a documentary film on his life called "Durelle."

The above biography is from the Wikipedia Durelle Bio.

Durelle suffered a stroke on Christmas Day, 2006, and also had Parkinson's disease. He died in a hospital in Moncton, January 6, 2007.