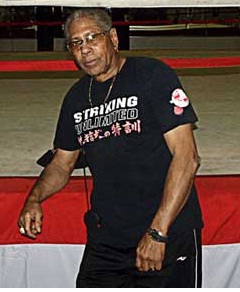 Kenny Adams is a boxer trainer. He was born in September 1940 in Springfield, MO, and grew up with 5 brothers and 4 sisters. He first became interested in Boxing when he was 5 or 6, he admits to always fighting as a little kid. In 2010, he was inducted into the St. Louis Boxing Hall of Fame. He was a natural, having his first amateur fight at 12, he was 95 pounds never having a trainer he beat his opponent. He had a successful amateur career, winning all army and all service championships, East Coast & Florida AU’s to name a few fighting at Flyweight and Bantamweight where he was nicknamed “Little Sugar” His good friend Ray Owens who was a 1964 Olympic alternate was known as “Big Sugar” both in homage to the great Sugar Ray Robinson.

After 30 years of military service, Adams decided to begin training. He had helped the 1984 American Olympic team achieve 9 gold medals, one silver, and one bronze as the number two. In 1988, he moved up to the top job and was again very successful winning 3 golds, 3 silvers, and 2 bronze medals. He was the first black person selected as head coach of the American team.

In the paid ranks, his first world champion was Rene Jacquot of France who stunned Donald Curry in 1989