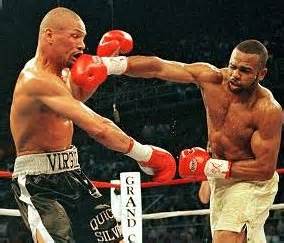 In early 1998, the WBC light heavyweight title was relinquished by Jones, who planned to move up to heavyweight. Jones signed to fight former heavyweight champion James (Buster) Douglas for the International Boxing Association heavyweight title on May 2, 1998 in Atlantic City, New Jersey.

Meanwhile, Jones changed his mind about moving up to heavyweight, backed out of the Douglas fight and signed to fight Hill.

In June 1998, the WBC stated that Jones was the "champion in recess" and Rocchigiani was the "interim" champion. The WBC said its references in promotions and contracts to the Rocchigiani-Nunn fight as a championship bout, and to Rocchigiani as the champion, had been typographical errors.

Jones and Rocchigiani were scheduled to fight in Biloxi, Mississippi on November 6, 1999. However, promoter Murad Muhammad called off the bout because Rocchigiani didn't attend a press conference in New York. Muhammad said he couldn't promote a bout with Rocchigiani if he didn't cooperate. The WBC subsequently stripped Rocchigiani outright.

Rocchigiani sued the WBC and was awarded $31 million in lost earnings and other damages by a New York court in April 2003. The court also retroactively restored Rocchigiani’s official WBC light heavyweight championship status, but only from March 28, 1998 (when he defeated Nunn) to April 15, 2000 (when he lost to Dariusz Michalczewski).