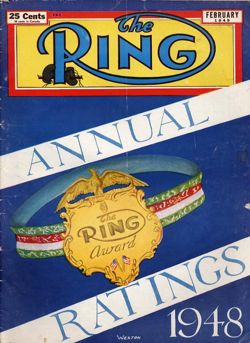 The first ratings in the history of boxing appeared in the February 1925 issue of The Ring magazine.

In the November 1958 issue of The Ring, Dan Daniel wrote an article entitled "Fleischer First to Devise Ring Ratings." The article stated that the idea of rating boxers originated in 1924 with editor and publisher Nat Fleischer, and that it came from Walter Camp's annual All-American college football selections. The idea had tremendous appeal, but questions arose as to who would get behind the ratings and how many boxers would be ranked in each of the nine weight divisions (the eight traditional divisions plus junior lightweight) existing at the time.

The nationally well-known promoter Tex Rickard was asked by Fleischer to lend his name to the ratings. It was agreed that Fleischer would formulate the ratings and then Rickard would review them to make any edits. Interestingly, Rickard did not make a single change. Publication of these first-ever ratings created a tremendous stir in the boxing world.

When the time came for publishing the second annual ratings, a national weekly publication offered Rickard $5,000 for the feature of publishing them, and he accepted, somehow believing that the idea belonged to him. Legal action was threatened by The Ring. Rickard "saw the light" and signed a new authorization with The Ring for use of his name. With Rickard's death in 1929, Jimmy Johnston became the new sponsor of the ratings. Later Fleischer took over as the sole author. Still later, the staff and correspondents of the magazine got involved in the ratings. In time, the magazine published monthly and annual ratings.

In the July 1987 issue of The Ring, an article by Nigel Collins appeared, entitled "A Return to Sanity: The New Ring Ratings." This article has a slightly different version of how the ratings came about. The article states that the first ratings were selected, not by Fleischer or The Ring's editorial staff, but by Rickard. It further states that Rickard continued to make the choices for a number of years, but after his death, Jack Dempsey took over for a short period. Next came Tom McArdle, the matchmaker for Madison Square Garden, who handled the ratings until 1933 when Fleischer decided on a staff compilation from correspondents around the world. This method was used until the May 1980 issue when the "panel/ballot" system was instituted.