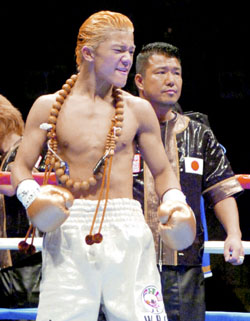 October 15 2007 - Kameda was suspended for one year by the Japan Boxing Commission following his defeat to WBC Flyweight Champion Daisuke Naito. Naito was in control throughout the match at Tokyo's Ariake Colosseum and successfully defended his title via unanimous decision after Kameda resorted to underhand tactics and had three points deducted for violations that included lifting the champion and throwing him down in the 12th round. Kameda's father and trainer Shiro, who was working the corner apparently directing his 18-year-old son to fight dirty at times, was hit with an indefinite suspension from the ring, the JBC said.[2]